Here’s another way to watch live news, TV, and movies for free with your phone

There are a lot of different free streaming services out there, and it’s tough to know which is worth your time. We’ve looked at both live and on-demand services from Pluto TV to Plex and Kanopy, and based on our reader’s repeated recommendations, now we’re taking a dive into XUMO — another option for free live TV as well as on-demand content.

How does XUMO stack up?

Like many streaming services, XUMO is cross-platform, offering both mobile apps for Android and iOS, as well as a desktop site you can stream from. It also has a Roku channel and an app for Fire TV devices. The Android app supports Chromecast streaming. 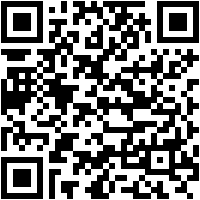 When it comes to content, XUMO has a similar selection of news when compared to Pluto TV, and in general, there is a lot of overlap between the two services. Pluto TV has more channels by number, but many of them are simply thinly-veiled individual title binge streams — though XUMO is also guilty of the same offense. That makes it tough to select one as explicitly or clearly “better” than the other.

I personally prefer some of the weird, niche channels on Pluto TV, and it also looks like it has a better on-demand movie selection to my eye, but XUMO covers the base entertainment categories/genres a bit more evenly, and its site/app is also a lot better. However, since they’re both free, you don’t really have to choose between the two — just enjoy both. Between the two, the selection of free streaming news is pretty wide, and it’s nice to have access to it without paying for cable.

There are a few things about XUMO that I find annoying though, like scrolling in the Android app. It doesn’t lock you into a single axis when you drag, so unless you’re perfectly precise as you fling up or down, you’ll pull just a tiny bit left or right, and drag the channel’s chronological view forward/back a bit, which looks obnoxious.

Ads on XUMO also had a tendency to bug out for me. They sometimes appeared visually distorted, stuttering and dragging out how long they’d take to play. On top of that, they seemed to play a little more often than I expected, even outside the clearly marked commercial breaks in shows. The cumulative effect made them much more obtrusive, though some of them seem to be skippable after a few seconds if you watch from mobile.

XUMO also doesn’t seem to support Android’s picture-in-picture feature, if that matters to you.

XUMO’s channel selection is also a point of contention for me, as it varies by platform. Depending on where and how you watch, you’ll have a different pool of content available, and that’s a little annoying.  The differences aren’t terribly substantial, on the order of a dozen channels or so, but it’s still bothersome.

How to watch TV on XUMO

Like many other free video streaming services, XUMO doesn’t make you register an account to watch. Getting started is as simple as downloading the app on a supported platform or navigating to the desktop site and clicking play. 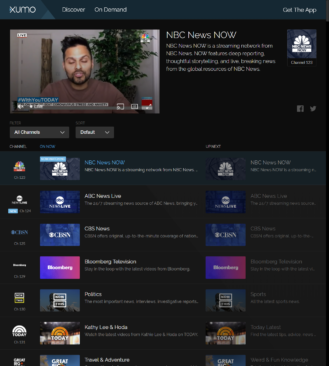 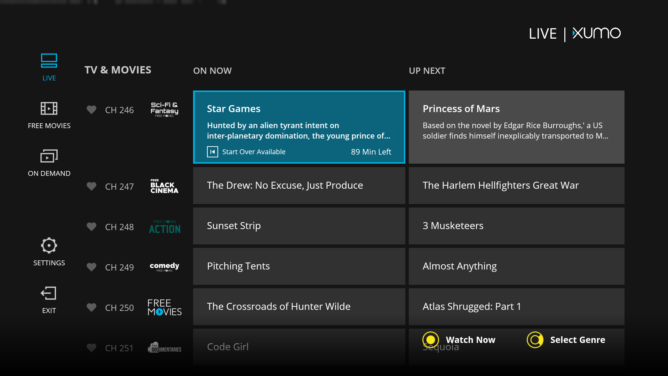 Though it might vary by platform (and I lack the hardware to test them all), both the Android app and desktop site are intuitively laid out and easy to navigate. On both, the default view shows you a vertically scrolling list of “live” channels with the currently selected one playing video at the top. Channels are organized by genres like “News,” “Sports,” “Kids & Family,” and “Science & Tech.” You can save favorite channels for easier access later via the heart button next to each, and they’ll end up listed at the top of your feed. However, without an account system, you can’t seem to sync those favorites between platforms.

In the mobile app, a bottom navigation tab allows you to switch between live, on-demand, and movie content. The on-demand tab is a bit of a misnomer, though, as it simply lists channels you can watch, actual on-demand content lives in the movies tab. And unlike Pluto TV, there’s a real search function you can use, though it doesn’t seem to return anything from the channel list. Humorously, the “settings” tab has precisely zero settings in it.

Unlike some other services, XUMO doesn’t show you much in the way of movie’s details once you select something in the lists. You get a 1-2 sentence summary of the plot, and that’s it. In some cases, it doesn’t even mention actor’s names. (Since you aren’t likely to recognize most of the no-name flicks XUMO offers, I don’t know if that’s a benefit or a drawback.)

The playback interface is similarly intuitive, with big obvious buttons for play/pause dead center, the usual volume control and scrubber along the bottom, buttons for sharing a link to your current content, and a “fullscreen” button that switches you between landscape and portrait/list view. Yellow dots in the scrubber seem to indicate when/where you’ll see ads, but they didn’t always happen for me. Up top, you have the title, options for closed captioning/subtitles, a cast button for streaming to Chromecasts or smart displays, and a “close” button to exit the stream or video’s playback.

In short, if you’re familiar with any other streaming service’s app, you should adapt to XUMO pretty quickly.

XUMO might not compete with the selection of movies available at Pluto TV or Kanopy, but its live content lists are packed with big-name news channels and plenty of bingeable content — especially if you’re on a budget these days. You might not get as much as you do from Netflix or Hulu, but it’s hard to argue with free.

You Can Now Run Android on Your iPhone, Due to Undertaking Sandcastle